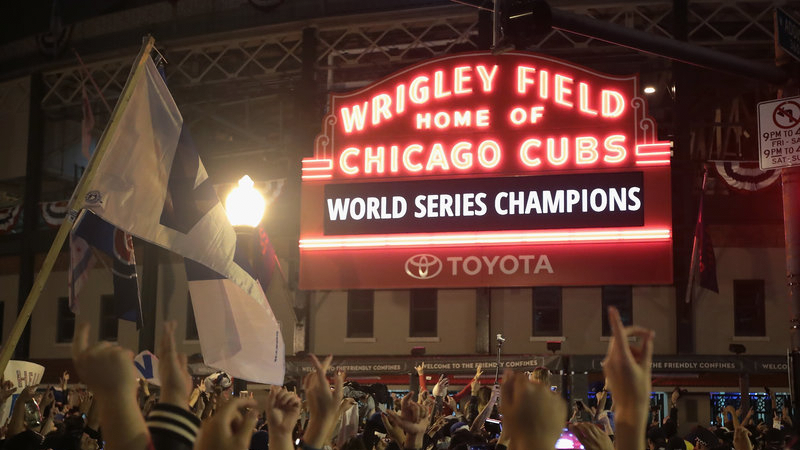 Pigs are flying the friendly skies and the devil is doing figure eights on ice skates. The 2016 Chicago Cubs must have won the World Series title.

I’m not a Cubs fan. I feel I should get that out in the open before I dive too far into the deep blue and red ocean of emotion that is currently flooding the streets of Chicago.

I’m also not the world’s biggest Major League Baseball fan. I love the sport, to be sure. I played it for many years growing up and still play men’s softball to this day. But I’m not too fond of the league or its operations.

With that said, as a resident of the Chicagoland area who has countless friends and family who are staunch, loyal supporters of the team, I couldn’t help but get wrapped up in the historical hoopla that surrounded the 2016 Chicago Cubs.

As a “fan” of the National League Central rival Milwaukee Brewers — and I use that word in quotes because “fan” is short for “fanatic”, and it’s difficult to be fanatical about a team you cannot even watch on TV from the comfort of your own home — there was part of me that did not want to see the Cubs win the title.

In fact, of the 108 years since the Cubs last won the World Series, 20-30 of those years I spent enjoying the curses, chokes and failures of a team dubbed the “lovable losers.”

But all things — both good and bad — must come to an end, and the Cubs quashed a century of futility with a stunning 2016 World Series title.

And as history was made, I sat by with a smile on my face and warmth in my heart as the final out was tallied in extra innings in Cleveland.

You see, it’s not the team or its players that I was cheering for and I don’t particularly feel good for them as a fan of a rival team. I also don’t feel a sense of satisfaction for the thousands of Cubs fans who traveled to Cleveland to watch Game 7 — and likely paid a boatload of money they really couldn’t afford to lose that probably would have been better spent elsewhere.

I couldn’t care less for the local celebrities who crawled out of the woodwork to show their faces in front of the cameras in “support” of their hometown team.

I also have little empathy for Millennial Cubs fans because they’re not exactly long-suffering fans. They weren’t around the last time the Cubs appeared in the World Series and certainly weren’t a gleam in their great-grandparents’ eyes in 1908 when the Cubs last won it all.

And the 2003 Steve Bartman incident in which the poor guy’s life was thrown into shambles? … likely perpetrated by angry, drunken Millennials for no good reason other than their pride and egos took a hit.

Generational unity is a wonderful thing

Instead, I am thrilled for elderly Cubs fans, those who might be part of the Greatest Generation, who survived the Great Depression and lived through World War II. I’m happy for the Baby Boomers who know the true definition of a “baseball curse” and not some passed-down folklore used as bait for a “woe is me” attitude. I’m even pleased for the Gen-Xers who might have sat on their fathers’ laps or crowded around the ol’ television set to watch a game as a family.

But most of all, I have thoroughly enjoyed the sense of generational unity that has brought Cubs fans together, both young and old and everyone in between.

Those who know me best are well aware of my affinity for unity. In today’s society, it too often feels like everyone is only out for themselves in this world, where entitlement and lack of ownership has taken the place of responsibility and accountability.

And sadly, unity only seems to show itself following some kind of national tragedy.

So, when something positive and uplifting like the 2016 Chicago Cubs comes rolling around, it brings me great joy to see a content, elderly Cubs fan sitting in the stands next to a zealous, boisterous college student or an innocent, wide-eyed little boy with an oversized ballcap and a glove.

As I scrolled through my Facebook news feed or watched incoming tweets via my Twitter account, the only consistency of what I saw was the inconsistency of the demographics I’ve read from and about.

Heartwarming tributes to grandparents who were lifelong Cubs fans before recently passing away. Emotional cries of joy from fans who lived through Cubs curses. And yes, even random outbursts in ALL CAPS with six exclamation points from “fans” who likely weren’t paying attention as recently as two months ago.

These are the people who make up a community and a family that spans across several generations and brings them all together if only for a brief moment in time.

The 2016 Chicago Cubs are World Series champions. History has been made, truly. But I’ve enjoyed what’s transpired off the field even more than what’s happened on it.